Posted at 22:26h in Uncategorized by nzuk 0 Comments
0 Likes
Share 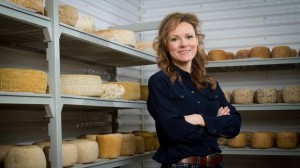 My obsession with the movie Gladiator and my love of cheese were bound to collide (right?). The missing link is a raw sheep’s milk cheese hailing from Kiscoty, Alta., recently named one of Calgary’s “25 Best Things to Eat.” The full-flavoured, tangy and addictive pecorino is made at the Cheesiry by Rhonda Headon who apprenticed in Tuscany, on a little farm near Pienza (a short distance from Montepulciano). The fields across from the farm were the location for the final sequences in the film where Roman General Maximus (Russell Crowe) imagines himself striding through golden fields to meet his family as he lies dying. Almost as importantly, it is an area famous for its pecorino di Pienza, a cheese made from the raw milk of sheep that graze on the flora that grows in the unique clay soil.